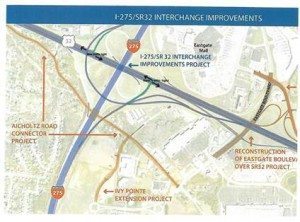 New I-275/SR32 ramp configurations scheduled for January 20 & 21 have been canceled due to weather.

Due to weather, the following work has been canceled for the week of January 20, 2014. Information will be updated once a new work schedule is provided.

Improvements to the I-275/SR 32  interchange will see two new ramp configurations. The first reconfiguration will direct southbound I-275 traffic to a new ramp to east or westbound SR 32. With this new configuration, a traffic signal at the ramp exit will go live Monday, January 20, 2014. 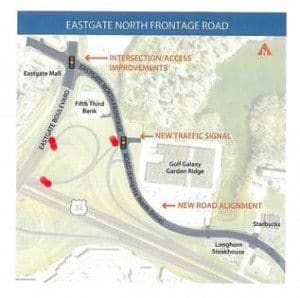 The second reconfiguration will permanently close the ramp from northbound Interstate 275 to westbound State Route 32, with motorists directed to a new ramp configuration from northbound I-275 to either east or westbound SR 32. The traffic signal at this new ramp exit will go live Tuesday morning, January 21, 2014. To accommodate work to put traffic on this new ramp, lane closures will be in place on northbound I-275, beginning at 7 p.m. Monday, January 20, 2014 and reopening by 6 a.m. Tuesday, January 21, 2014. The diagram to the right illustrates in green both new ramp configurations.

The implementation of these new ramp configurations will eliminate four weave/merge points at the interchange – two on SR 32 and two on I-275, making access safer and easier for motorists wishing to enter and exit I-275 and SR 32.

In addition, work to implement a traffic switch on Eastgate Boulevard will  take place on Monday, January 20, 2014 with lane closures in place on north and southbound Eastgate Boulevard over SR 32 from 9 a.m. to 6 p.m. Traffic will be switched  from the existing bridge to the new bridge and new pavement. Traffic will be maintained during the switch, but delays could be possible.

Once work is complete, one lane of traffic in each direction will be in place along with a left turn lane to the ramp to eastbound SR 32. Southbound traffic will have access to one right turn lane into Best Buy, one thru lane and one left turn lane to southbound Eastgate. Northbound traffic will have dual left access into the mall, one thru lane and one right lane to Eastgate North Frontage Road.

With traffic placed on the new bridge, demolition of the existing Eastgate Boulevard Bridge will commence next week, as well. To accommodate that demolition, nightly lane closures will be in place on east and westbound SR 32 from 8 p.m. to 6 a.m., beginning Monday, January 20, 2014. Work is expected to take approximately two weeks. Construction activity will also require the closure of the ramp from northbound Eastgate Boulevard to westbound SR 32 and the ramp from Eastgate North Frontage Road to the Eastgate Blvd/westbound SR 32 ramp from 10 p.m. to 6 a.m. Monday, January 20, 2014 and Tuesday, January 21, 2014. The diagram above indicate the closures in red. Arrow boards and/or signs will be put in place prior to the work zone to alert motorists of the upcoming lane closures.