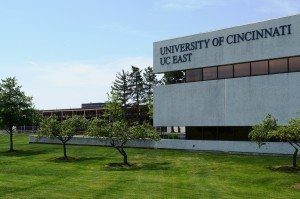 Batavia, OH – Clermont County Commissioners are pleased to announce that on July 30, 2013, the State of Ohio returned $2 million that was held in escrow as part of the former Ford plant redevelopment project.  “We are proud of the success of this project. In three years’ time since IRG purchased the facility, the redevelopment pace of this site is unprecedented,” stated Commission President Ed Humphrey.  The $2 million proceeds are from an Operating Deficit Reserve fund that was required by the State as a third level of security for the project.  Approximately seventy-five percent of the 1.8 million square foot facility is either occupied or under option currently.

In January 2006, the Ford Motor Company announced plans to close the facility and by August 2008 the transmission plant had closed its doors. The Department of Community & Economic Development was tasked with promoting the site to industrial redevelopers. Industrial Realty Group saw promise in this facility based on its unique size, excellent utility infrastructure, and environmentally clean status. With assistance from the State of Ohio and the Clermont Board of County Commissioners, IRG purchased the building in April 2010 for $3.5 million.

The Commissioners carefully considered the risks and benefits of injecting public funds into this project. With this building being the largest and most visible manufacturing structure in Clermont County, the risks associated with taking no action were great. No single-user tenants were seriously considering purchasing the property, and Ford Motor Company expressed intent to demolish the building for scrap value by the end of 2010. “It is daunting to think about what could have been if this structure had been demolished. We now have an educational institution in UC East, along with a manufacturing technology center, in addition to well-paying manufacturing employment opportunities,” commented David Uible, Vice President of the Board of County Commissioners.

“The most rewarding aspect of this project for me is the local nature of it,” added Commission Member Bob Proud. “Local funds were used to make this project happen, local companies and educational institutions were the first to lease space and reinvest in the community, and local residents are working at these companies. We hit a home run with this project, and everyone in the community benefits from that success.” Approximately 500 jobs will be created or retained by the companies that now call the IRG facility home. In addition to UC East, other entities include Huhtamaki, Inc. which purchased over 900,000 square feet earlier this year, as well as Altimet/Global Scrap Management and Engineered Mobile Solutions. After Huhtamaki’s renovations are complete nearly $65 million in capital improvements will have been invested in the former Ford transmission facility.