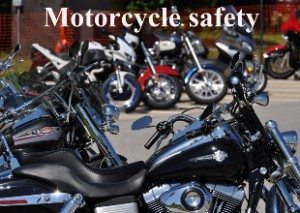 Batavia, Ohio – In recognition of May as Motorcycle Safety Awareness Month, Clermont County Safety Communities reminds motorists and motorcyclists alike to “share the road” conscientiously and courteously to help prevent motorcycle crashes which remain one of the most prevalent causes of death and injury on Clermont County roads.

In addition to stressing the mutual responsibilities shared by all users of the road to prevent motorcycle crashes, Officer Kenney from the Milford Police Department said the safety campaign – initiated by the Department of Transportation’s National Highway Traffic Safety Administration (NHTSA), state and local safety officials nationwide, and motorcycle safety groups everywhere – will also have increased enforcement by local police throughout May to make sure motorcyclists, and drivers of all types of vehicles, are obeying state and local laws.

“Safety is a mutual responsibility for motorists and motorcyclists alike,” said Officer Kenney.  “Motorcyclists are about 30 times more likely to die in a crash than passenger vehicle occupants, so whether you are driving the family sedan, an SUV, a school bus, a delivery van, or an 18-wheeler, drivers should always be on the lookout for motorcyclists. Drivers must be aware that a motorcycle, as one of the smallest of vehicles on the road, can be ‘hiding’ in your vehicle’s blind spot. Always check blind spots, use mirrors and signal before changing lanes or making turns.”

Officer Kenney added, “Motorcyclists have responsibilities too. Riders should obey all traffic laws and be properly licensed, alert to other drivers, conspicuous at all times, never ride impaired or distracted, and always wear a Department of Transportation-compliant helmet and other protective gear.”

This safety advice is particularly timely as motorcycle fatalities in 2011 showed a continued increase to 4,612. Motorcycle fatalities accounted for 14 percent of total highway deaths for the year despite motorcycle registrations representing only about 3 percent of all vehicles in the U.S..  Officer Kenney offered the following tips for drivers to help keep motorcyclists safe on our roadways.

Remember, a motorcycle is a vehicle with all of the rights and privileges of any other motor vehicle. The person under that helmet could be a mother,
brother, doctor, or friend;

Officer Kenney also said motorcyclists can increase their safety by:

“Our message to all drivers and motorcyclists is: Help to share the responsibility of keeping all road users safe, and do your part by safely sharing the road,” Officer Kenney concluded.